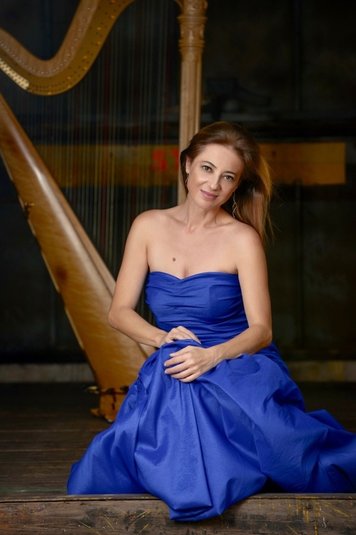 photo credit Billy Elkins
Italian born harpist Giuseppina Ciarla’s performances have been described as “hearty and colorful . . . enchanting and infectious.” Equally at home in the orchestra as well as a soloist and chamber musician, Ms. Ciarla has a true passion for opera and has been Principal harpist with the Sarasota Opera since 2002. In 2010 Ms. Ciarla made her debut as Principal harpist with the orchestra of Teatro Petruzzelli - Bari, Italy in a production of Swan Lake with the Bolshoi Ballet. During her tenure with the orchestra she was featured as a soloist on Mozart’s flute and harp concerto and collaborated in symphonic, opera and ballets with noted conductors Lorin Maazel, Stephan Anton Reck, Roberto Abbado and Daniel Oren, among others. Additional collaborations included American composer Terry Riley, Italian film director/actor Nanni Moretti, the performance artist Antony Hegarty of Antony and the Johnsons, along with performances at Lincoln Center in New York and the Italian Embassy in Washington, DC.
​
Ms. Ciarla’s chamber music activities have included performances with many artists of international acclaim including flutists Carol Wincenc and Tara Helen O’Connor; violinist Benny Kim; clarinetist Eddie Daniels and pianist/composer Marc Neikrug at the Santa Fe Chamber Music Festival with whom she recorded Japanese composer Toru Takamitsu’s “Rain Spell” for CD release. Her versatility has led to playing the baroque harp, mandolin in several productions of Don Giovanni including at the Santa Fe Opera, guitar in the Barber of Seville and to singing while accompanying herself on the harp in many of her own eclectic arrangements. ​

​Ms. Ciarla holds degrees from the Conservatorio Lorenzo Perosi in Italy and the University of Arizona. She has recorded for Bongiovanni and Koch record labels.

When she is not busy performing Giuseppina enjoys traveling, being in nature and has a great passion for cooking.  She enjoys spending time with her family in Italy and her friends from all over the world.  Giuseppina's brother Luca is an internationally acclaimed violinist and her sister Alberta is a lawyer and a songwriter.   Giuseppina is the proud aunt of Giulio, Milo and Miranda.
For all inquiries and availability please use the contact form
Human@Harp Blog
© Giuseppina Ciarla, 2021
https://mailchi.mp/7bf144f45fcc/subscribers